This article was first published in the February 2020 edition of The United States Specialist, the monthly journal of the United States Stamp Society. Click this link to read the article in the original print layout.

Buffalo Soldiers wore buffalo hide to protect against the hard winters in the areas they were fighting and, because of their tightly curled hair, reminded Native Americans of the bison, hence their name. 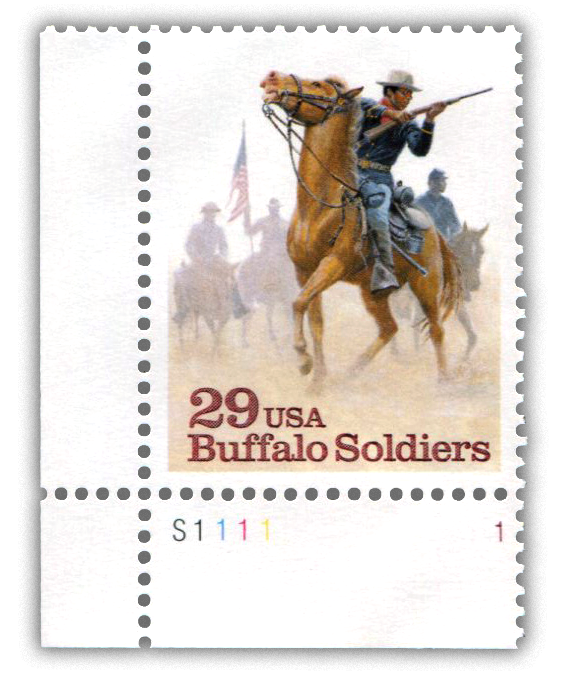 Although among historians there is little agreement on the source of the nickname for the Buffalo Soldiers, there is no argument about their contributions in the settlement of the western United States. Shortly after the end of the Civil War, an act of Congress resulted in the formation of several new units in the U.S. Army. The 9th Cavalry was established in Greenville, LA with the 10th Cavalry in Leavenworth, KS. The original act directed the formation of four infantry regiments but those were eventually merged into the 24th and 25th Infantries (Figure 2). All of these units were comprised of soldiers who would become known for their valiant service but who could not be on the parade ground with other units. Comprised of Civil War veterans, former slaves and freemen, the Buffalo Soldiers faced constant discrimination due to the color of their skin.

In spite of being supplied with equipment and uniforms in poor repair, and horses that were inferior to the needs of their mission, the Buffalo Soldiers served the nation with distinction and earned a reputation for being courageous and dedicated warriors. While the classic impression of the Buffalo Soldiers is drawn from images of the American West, the segregated units served until they were deactivated in May 1944. These all-African American units had the lowest rates of desertion and courts martial in their day. It was also common for these men to be decorated for valor.

Tasked initially with fighting the Comanche, Kiowa, Cheyenne and other Native tribes in the western frontier, Buffalo Soldiers were also instrumental in key battles of the Spanish-American War. The 9th Cavalry fought alongside Theodore Roosevelt’s Rough Riders at the Battle of San Juan Hill and even served as his honor guard when, in 1903, he visited San Francisco as President of the United States. The 9th and 10th Cavalry Regiments also served in the Philippines into the early 1900s. Discrimination, often fierce and unrelenting, did not deter these professional soldiers who even transitioned well into peacetime missions which included constructing roads and protecting the national parks from thieves, poachers and fires (Figure 4). And yet, for so long their contributions were largely ignored—until 1994.

On April 22, 1994, in four different cities, the Buffalo Soldiers were finally honored for their service to a nation that had not always been as grateful as it should have been. Marked with first day ceremonies in Dallas, TX; Leavenworth, KS; San Angelo, TX; and Sierra Vista, AZ, the U.S. Postal Service issued a 29-cent stamp honoring the Buffalo Soldiers. The stamp, designed by artist Mort Kuntsler, shows four Buffalo Soldiers on horseback. The illustration, lacking background detail, focuses attention on the mounted cavalryman — a fitting tribute to troopers who were largely invisible to the country during their years of service.

As with most stamp issues, the efforts to bring the Buffalo Soldiers stamp idea to fruition spanned many years and involved an assortment of supporters. The release coincided with the 1994 convention of the African-American Postal Leaders United for Success (A-PLUS). Members of the association members were vocal in their support of the stamp, drawing public attention to the role Buffalo Soldiers served in mail delivery on the American frontier.

In attendance at the first day ceremony at Fort Leavenworth were several surviving members of the 9th and 10th Cavalry Regiments. The first day cover depicted in Figure 3 was signed by four of these Buffalo Soldiers. Although the units were incorporated in the 2nd Cavalry Division short before the U.S. joined World War II, their service continued. 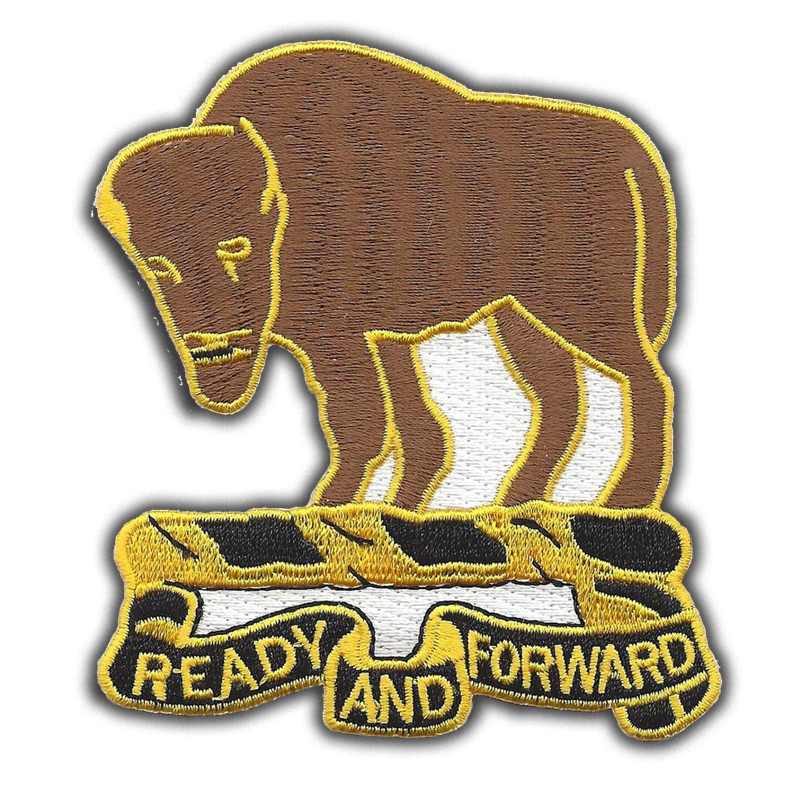 While the honorees from the 1994 ceremony were not “original” Buffalo Soldiers, the men in the modern continuation of these troops served with no less distinction while suffering similar discrimination. History suggests the African American soldiers were proud of the moniker assigned to them, after all the buffalo was adopted as part of the 10th Cavalry’s regimental crest (Figure 5, left).

Steeped in the Language of Love

Adventures in the Desert